The Gods Made Heavy Metal in Istanbul

The eminent heavy metal band Manowar was in Istanbul, Turkey on August 6th 2005. The concert was at Yedikule (7 Towers) Dungeons, the perfect place for it. It was also raining and thundering when the band was playing Hail and Kill. The show was in one word, PERFECT!, we kept on screaming and singing the songs at the top of our voice during the concert (well, I couldn't speak for two days afterwards :)).

One of the most important events of the concert was, Joey DeMaio's announcement in which he said, "Manowar's hatred against Turks is a LIE!"; he even kissed the Turkish flag, and said, "This is the color of heavy metal" , and later, "heavy metal was born here". Damn right! Below is a photo of DeMaio with the Turkish flag: 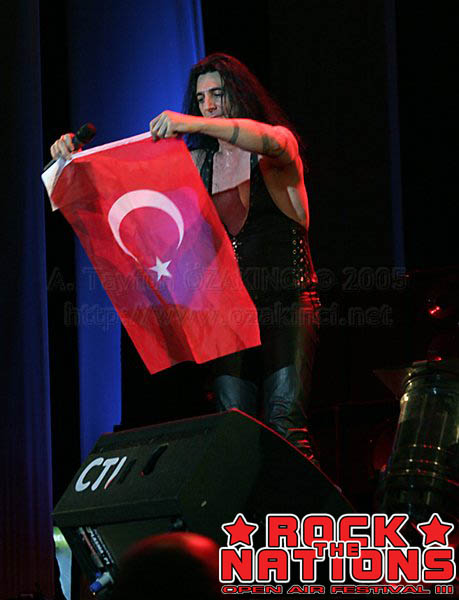 The concert was the main event of the Rock the Nations 3 Open-Air Festival. Manowar promised to come back to Turkey next year; be sure to be there!